Who’s to Blame for BP?

Even as the disaster in the Gulf continues to unfold, so do our efforts to understand how and why it happened. But while concerns over environmental degradation and the billions in lost revenue occupy much of the news, the question of responsibility remains central. And who is responsible? Who is to blame? Unfortunately, the two most popular interpretations offer little help. They do, however, provide useful illustrations of the kind of thinking that helped create the crisis in the first place and they also suggest a deeper interpretation in light of faith in God.
The first interpretation I will call a version of the ‘Great Man’ theory of history....read the full post at Religion Dispatches
Posted by David True at 10:18 PM No comments:

What could be more American?

Do you support the building of a mosque at Ground Zero? I wouldn't be surprised to hear this question or a similar one asked during a 2012 Presidential Debate.

The full post can be read at the Presbyterian Outlook blog.
Posted by David True at 10:26 AM No comments:

The Church, Culture, and Justice: The Not so Strange Case of Same-Sex Marriage 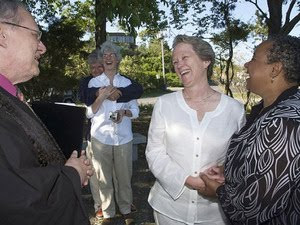 The Presbyterian Church (USA) gathered for its bi-annual General Assembly (G.A.) has refused to consider a motion that the church allow ministers to officiate marriage ceremonies without regard to the sexual orientation (at least in states that recognize such unions). For those of us who believe that sexual orientation is a gift of God, it is sad and frustrating to see the church refuse to even consider the measure. That the G.A. apparently did so in part because of a clever procedural maneuver is all the more disappointing.  (I acknowledge that “disappointing” does not begin to describe the deep sense of heartbreak and alienation that many persons feel over this and other forms of judgment by the church). Almost simultaneously the United States District Court for the District of Massachusetts ruled that the Defense of [Straight] Marriage Act is unconstitutional.  In other words, the court has done--roughly speaking--what the church opted to avoid altogether. This juxtaposition of the church and the court may seem strange and leave us feeling further distanced from the church that fails not only to live up to its high calling but merely to keep up with culture.

On further reflection, however, this situation is a reminder of what it means to be protestant. Since our movement’s origins in the 16th century we have been deeply suspicious of the visible or institutional church. The Reformers redefined the church as the people of God subject to the Word of God. Since then the church has had a love/hate relationship with itself. We have recognized that we are the people of God but also that we continually fall short. When a denomination fails, we may be bitterly disappointed, but as protestants we believe that we are not simply called to submit to the church’s authority, not if we believe it has erred on matter of conscience. In such cases we will do what we protestants do, we will protest, but not only that.  We will also look to discern the will of God being done beyond our wills and walls--recognizing that the church is far bigger than any one denomination and that God is far bigger still than all the denominations combined. Indeed, God’s grace abounds, even in the law, sometimes especially in the law.

Posted by David True at 8:34 PM No comments:

The Generations: Elders in Revolt (Part One)

Seniors are Strongest Advocates for Change in 2010 - Pew Research Center

Several recent polls indicate that older Republicans (and Americans more generally) appear to be more partisan than younger voters. This poll illustrates the trend well, but one question in particular jumps out: "Would you vote for a candidate willing to compromise with people they disagree with? [J]ust 18% of Republicans and GOP-leaning independents ages 65 and older say they would be more likely to favor a candidate who is willing to make compromises, while more than twice as many (45%) say they would be less likely to vote for such a candidate and 31% say it would make no difference."

The bottom line is that almost half of older Republicans see compromise with Democrats as problematic. This may not seem too terribly significant given our highly partisan context, but this assumption neglects the telling difference between Republicans of different ages. This difference is highly suggestive for those interested in making sense of American culture.

First, there is a deep worry that many of our elders are not wiser, but simply more partisan. Wisdom has traditionally been associated with moderation or temperance. This is true not only in classical interpretations of virtue but also of religion. Moderation has in turn been understood as being closely related with being able to reach agreement with others with whom one disagreed, even strongly. To be sure, there have been many exceptions in which wisdom has been dominated by the courage to resist compromise in the face of great evils. And this is where our present story picks up: almost half of older Republicans see President Obama as a great evil.  Indeed, on this 4th of July many of those celebrating are convinced that ours is another revolutionary moment when tyranny is to be courageously resisted. The hard truth is that this is simply another way of saying that many of our elders are not wiser but more partisan, indeed foolishly so.

In my next post I'll discuss some of the challenges this presents for politics, families, and religion.
Posted by David True at 6:11 PM No comments: