The Picture of Success in Afghanistan

With all the focus on the recent Rolling Stone article, this Times article seems to have received little notice. It is one of the best I've read in terms of describing the challenges of the Afghanistan War. In particular it shows U.S. soldiers spending their days tending the multiple layers of local leadership and governance while the Taliban spend their nights disrupting these fragile bonds. The Taliban's work is obviously easier as their purpose is simply to frustrate our efforts by acts of violence and intimidation. One would expect that as our troop levels increase, the Taliban's night visits will become increasingly rare. Should this come to pass, we will have succeeded in Afghanistan. For all the moral complexity of this war, protecting civilians while they sleep may be the clearest duty, though even here tactics may prove otherwise.
Posted by David True at 10:27 PM No comments:

Obama relieves McChrystal of his duties

The insubordination of General Stanley McChrystal may yet come to be seen as a key moment in the Afghanistan War and in Barack Obama's presidency, an opening in which critical changes were made. First, in accepting McChrystal's resignation, Obama sends a strong message of the need for unity of purpose, especially in a time of war. Then, in nominating General David Petraeus, Obama gains a military leader capable of bringing that unity about. Indeed, Petraeus is much better suited to lead a campaign that is as much a political effort as a military one. If anyone can deliver success in Afghanistan, it is probably Petraeus. It may even be that we come to look back on this as an opening for bipartisanship, when political leaders came to see the limits of partisan politics and began to repair the idea of a bipartisan foreign policy.

Of course, one might argue that this is nothing more than wishful thinking, but such cynicism overlooks the problematic nature of McChrystal's leadership team, the superiority of Petraeus, and the leadership of the President and political leaders from both parties. If nothing else, it is an opening.
Posted by David True at 2:45 PM No comments:

Following up on yesterday's blog about an emerging consensus on energy, this poll by CBS and the NY Times seems to indicate that the majority of Americans are NOT willing to pay more for alternative fuels, but the survey asks specifics that don't easily translate to other areas or larger questions about the cost of energy. Rather than explore costs general or in a variety of scenarios, this poll ask a few questions about the gas tax. This hardly seems more like a fetish than a fair indicator. And what sense does it make? Why would one agree to an increase in the gas tax for some possible future payoff, especially when there hasn't yet been an argument for such a move, nor is there likely to be one. And why would the poll ask such a flat footed question, especially about such an important issue. The big question is not whether we are willing to pay more, increasing demand and decreasing supply indicate that we will. The question is this: how long and hard will our transition to a sustainable energy policy be?
Posted by David True at 10:33 AM No comments:

The Emerging Consensus on Energy?

A new survey by the Pew Research Center indicates that a healthy majority of Americans support increased energy exploration and production as well as limits on carbon dioxide and other greenhouse gas emissions. Pew characterizes these results as "mixed signals" but they seem fairly clear--the majority of Americans support a moderate approach to energy, one that comes closer to what Obama has been advocating than either the Left or Right would like to admit. This may come as a surprise given the BP disaster, but it probably shouldn't surprise us given the slow and unsteady pace of the economic recovery.

The consensus shows growing support for an environmental friendly energy policy and economy. Indeed, the most telling single line in the report is in regards to "an overall goal for U.S. energy policy, 56% say it is more important to protect the environment, while 37% say it is more important to keep energy prices low." 56% vs. 37% indicates that we have an emerging consensus on energy, though not a large or stable one. It may be that significant divides remain or that a new middle way is opening in which the environment comes first and price second. Unfortunately, it is not yet a bipartisan consensus capable of doing heavy lifting. I'm not sure what that will take, but apparently more than BP's best or worst efforts.
Posted by David True at 5:43 PM No comments: 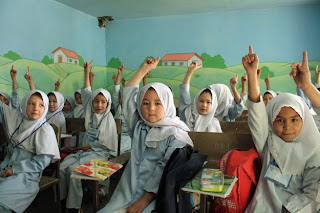 The Afghanistan War is something that many of us Americans care about but have long since stopped following. And who can blame us? Everyday it seems there is another troubling story of corruption, mismanagement, an intimidated population, and behind it all an increasing number of casualties. How many heartbreaking stories should one be expected to absorb? Nevertheless, attention is called for. As part of our responsibilities as citizens of a democracy, we are expected to study a horrifying object, war. Surely this is a strange duty, especially for those of us who strive to be people of peace and compassion, but we owe this much because the war is fought in our name and we have some power to alter its course. If the war is unjustified or becomes unjustified, then it is our duty to prevent it, end it, or change how it is fought. This requires that we attend to news of the war. But attending to the war comes with risks, for the things we study we come to love or at least accept, but if war ever ceases to be horrifying, then our seeing has become distorted from that of democratic citizens, much less people of compassion, to disciples of the god of war.

That's the power of these photographs taken by teenagers: they remind us that Afghanistan is not simply a place of war/horror. Afghanistan is full of beauty, even after decades of war. This, of course, should not come as a surprise to anyone familiar with Afghanistan, but perhaps this too is telling of the power of war, that simply following the news from the war can cause us to forget that beauty still exists, even in a place of war.
Posted by David True at 9:36 PM No comments:

The Crucial Issue in Afghanistan

Might this be the crucial issue to follow in Afghanistan--the motivation (and professionalization) of the Afghanistan police and soldier? While this is related to the issue of corruption, it is bigger than corruption. The central issue in Afghanistan is figuring out who is willing to work and fight for what or for whom. Surely there are a host of possible explanations as to why these police officers appear slothful--as mundane as the weather and as serious as a lack of loyalty to their employer, the government of Afghanistan. The ray of hope in this article is the hint that other police officers are motivated--that--and the motivation and skill of the American and Canadian soldiers.
Posted by David True at 9:23 AM No comments:

Save the Lecture (on Afghanistan)

The Times editors take a fairly moderate position here, but their moderation is overwhelmed by moralism mixed with paternalism. On the one hand they are willing to give the counterinsurgency some time. On the other hand they talk of managing Karzai as if he were some project we might figure out rather than the leader of a nation that has been at war for more than 30 years. They, like much the press, focus on the shinny bright object, Karzai, as if he were an independent actor, rather than a player--a significant player to be sure--in a complex and tensed system. Karzai reflects the system as much or more than he shapes it. We complain that he acts insecurely and paranoid, but surely these are signs of sanity in a radically insecure context.

Again, my point is not that relations with Karzai can't be better managed, but that the Times writes as if he were a neglected summer camp project. If it is so easy, why not suggest how that relationship should be better managed. A place to begin would be with a recognition that he is working in a society that has a strong bias for local rule and against outsiders. The insurgency exploits this bias intensely enough to mimic a civil war with all the usual accompanying bitterness and terror, think kidnapping and assassinations. Karzai himself is a survivor of at least one assassination attempt. In this context, consistency and respect would seem to be among the things most likely to instill the same on his part. The Times instead claims that we "need to make clear that there's a limit to American patience." In stating as much they are seemingly ignorant of recent reports indicating that our July 2011 deadline intensified Karzai worries and sense of isolation and insecurity.

The Times also sounds detached from reality in its demanding that Afghanistan become a liberal democracy. How can we expect a deeply conservative tribal society--at least outside Kabul--to fight and die for a foreign idea such as liberal democracy with all the rights we are accustomed? Even in our "free society" we make room for a variety of family patterns. Why should we insist on more in Afghanistan, especially when we lack the power to make it happen?

Lastly the Times criticizes Karzai for offering the Taliban the carrot of being removed from the United Nations terrorist blacklist--saying it is too early for such talk--when only a few sentences above the editors have lectured us about the lack of time. If we are going to start departing Afghanistan in a year, when do we expect reconciliation and pacification to begin?

After these almost silly statements, the editors conclude as you might expect, with more lecturing: "General McChrystal is going to have to do a much better job in Kandahar. Mr. Karzai is going to have to drop his illusions and commit to the fight." They make is sound so simple; just try harder. They do know this is a war, right?
Posted by David True at 8:49 AM No comments:

A Double-Edged Sword in Afghanistan

It is unclear what will come of the news that the U.S. has identified vast deposits of minerals in Afghanistan. The article stresses the huge potential (and upside) of this discovery, but it is clearly a double-edged sword. To be fair, the article points this out in terms of Afghanistan's infamous corruption, but it only indirectly hints at potential U.S. ambitions and greed--think US based multinational corporations. Surely there will be conspiracy theories that these riches are why we went to Afghanistan and while these can easily be rebutted, they are prophetic in the sense that we will be tempted to extend our time there--thinking that we have earned the opportunity to gain from these mines and that our departure would allow China to become the dominant player and beneficiary. We may even think we are defending our interests and those of the Afghanis. It may be though that China's interest could overlap with our interests. Might not it be possible to welcome the Chinese as partners in stabilizing Afghanistan and the region? If the deposits are nearly as large as anticipated and if the Afghanis need as much assistance as expected, then surely there's enough work and wealth to go around. Then again it is easy to imagine the allure of vast riches only worsening the corruption, mistrust, and the fighting.
Posted by David True at 10:43 AM No comments: